Distributed Denial of Service (DDoS) is disruption to internet-based services that can make any internet connected machine unavailable to perform its intended purpose. The objective of this attack is to maliciously attempt to disrupt traffic on a server, service, or network, with a flood of Internet traffic. Think of the attack as a traffic jam on a busy highway – disrupting the normal flow of traffic and eventually causing all traffic to stand still. Any business that depends on internet access for business processes and services (SaaS services, B2B/B2C,etc, Remote Access, etc.) should ensure continuity plans to address DDoS attacks are in place.

DDoS attacks can be devastating and have affected some of the most powerful businesses, including Yandex, a Russian tech giant. In September of 2021, the company was attacked by Meris, a recently discovered DDoS botnet that’s infecting machines at record-breaking speed. Meris has also infiltrated systems in New Zealand and in the United States. Let’s take a look at how DDoS botnets work and why the recently discovered botnet, Meris, is a major concern for cyber security specialists tasked with the responsibility of mitigation.

What is a ddos attack?

As one of the most powerful types of cyber attacks, DDoS typically utilizes an array of compromised and non-compromised computer systems (computers and IoT devices) to flood their intended targets with bogus Internet traffic. The attacks are accomplished through the networks of Internet-connected devices, which have been infected with malware and allow them to be controlled by attackers. The individual devices used to carry out these attacks are called bots, while a group of bots is called a botnet. Attackers can send remote instructions to each bot with the goal of sending spam, stealing credentials, spying on people and organizations and, of course, orchestrating a DDoS attack.

After a victim’s server or network is confirmed by the botnet, BoTs can use multiple methods to send large amounts of traffic to the targeted IP addresses – causing an overwhelming flood of traffic and resulting in a denial-of-service to the server or network’s normal traffic. Trying to separate the attack traffic from normal traffic can be difficult because each bot is a legitimate Internet device.

In the early summer of 2021, Cloudfare, an internet infrastructure firm, experienced a DDoS attack that was almost three times larger than any previous DDoS attack they’ve seen. Cloudfare detected and mitigated 17.2 million bogus traffic requests-per-second (RPS) on average. The attack was launched by a botnet named Meris and it targeted a customer in the financial industry. As a result, Meris was able to bombard Cloudfare with over 330 million attacks. Cloudfare reported that the attack traffic came from more than 20,000 bots in 125 countries, with 17% being from India and Brazil.

Discovered in June 2021, Meris is also responsible for attacking the Internet tech giant, Yandex, between August 29 and September 5, 2021. The botnet successfully launched about 250,000 malware infected devices globally and has sent 21.8 million bogus RPS – making it the biggest DDoS attack in history. Apparently, Meris is exploiting a security vulnerability within internet routers produced by MikroTik. The attackers are taking advantage of a 2018 bug found in more than 56,000 MikroTik hosts. The bug is found in routers owned by businesses, as well as consumers who use them at home. Owners of the MikroTik routers have more than likely left them unpatched since 2018. The United States is home to 42% of MikroTik’s routers, followed by China at 18.9%.

In September 2021, Brian Krebs of KrebsOnSecurity.com announced that his site was also briefly attacked by Meris, but fortunately the attack was successfully mitigated by Akamai. The attack was among the largest they had ever seen with the difference being that Meris doesn’t appear to be using tried and true attack methods seen in a DDoS attack.

Typically, DDoS attacks rely on the DNS reflection method to leverage unmanaged DNS servers on the Web, creating large traffic floods. The DNS reflection attack method counts on unmanaged routers belonging to businesses or consumers. Attackers can then send spoofed DNS queries to those servers and forge the request, so it appears as if it’s coming from the target’s own network. When the servers respond, the response gets sent to the spoofed address.

Additionally, attackers amplify the reflective attack by creating DNS queries, creating responses that are much larger than the requests. Krebs stated that when their Meris attack was analyzed, the attackers didn’t rely on DNS reflection or amplification. Instead, their attack method included requiring a legitimate connection between the attacker and the target, including SYN, GET, and POST floods. The attack involves a browser requesting a connection to a server, then without waiting for a response, more requests are sent. The attack technique is exploiting HTTP pipelining, which allows Meris to achieve high RPS numbers.

Krebs further said that the largest portion of the Meris attack came in the form of traffic designed to look like generic routing encapsulation (GRE) data packets. GRE allows two people to share data they wouldn’t be able to share over the public network itself. Seeing this large of an attack come from GRE is highly unusual.

Previously, we mentioned that Meris was exploiting an unpatched vulnerability (CVE-2018-14847) within MikroTik routers from 2018. At the time, the exploit was new and was used against the routers - giving them the ability to execute remote code on affected devices, put a root shell on said device, and bypass the router’s firewall. Next, the attacker gains access to the internal network and loads malware onto their victim’s system undetected.

Rated medium in severity, the attack affected Winbox, a management component and a Windows GUI application for MikroTik’s RouterOS software. The vulnerability tied to Winbox allowed attackers to read files that flow through the router without authentication. The attacker also had the capability of writing files to the router. Tenable Research warned that this exploit needed to be taken seriously due to the new hacking technique that allowed for remote code execution on MikroTik routers.

MikroTik’s patch was able to stop all the attack techniques associated with CVE-2018-14847, but only 30% of MikroTik’s routers were patched, leaving 200,000 routers vulnerable. By August 2018, 3,700 MikroTik routers were used in a cryptojacking campaign, and 7,500 routers were used to forward the owners’ traffic to eavesdropping cybercriminals.

the future of ddos attacks

Cyber security researchers say that Meris has yet to exploit the MikroTik vulnerability to full capacity. The attackers behind Meris have the capability to execute a much larger attack, it just hasn’t happened yet. Although it’s unclear how MikroTik’s routers are being compromised on such a large scale, Qrator labs believes that the most recent exploits could be due to “some vulnerability that was either kept secret before the massive campaign’s start or sold on the black market”.

Researchers at Qrator Labs also said that the Meris attacks are substantial with dozens of thousands of host devices. They saw a total of 30,000 host devices being used through several attacks, with Yandex collecting the data of about 56,000 attacking hosts. However, they believe that number is probably higher due to the rotation and the attackers not wanting to show what they are capable of all at once. 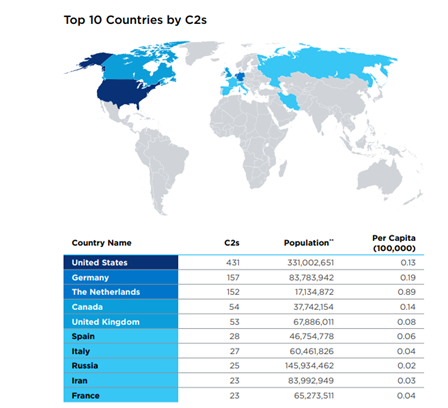 According to Lumen’s research, the country hosting the most DDoS Command and Control Servers (C2s) was the United States – with a total of 431. Germany and the Netherlands tied for second place with over 150 C2s each.

It’s clear from Lumen’s statistics that DDoS has the ability to devastate any business that relies on the internet. Even if you think you or your business won’t fall victim to such an attack, think again. Yandex is one of the largest technology companies in Russia and it was hit with the biggest DDoS attack in history. Typical targets for a DDoS include: any online business or organization that provides online services, shopping sites, and online betting. If your business falls into any of those categories and you don’t want to be the next victim, take a look at Avertium and Lumen’s collaborative recommendations to see how we can help protect you.

Botnet – a network of computers infected by malware that are remotely controlled by an attacker.

DDoS (Distributed Denial of Service) – takes advantage of capacity limits that apply to any network resources. A DDoS attack sends multiple requests to the compromised web resource, trying to exceed the site’s capacity. This prevents the site from functioning properly.

IoT Devices (Internet of Things) – computer hardware, such as appliances, machines, and sensors. They transmit data over the internet or other networks.

SYN Flood – a network-tier attack that floods a server with requests without responding to corresponding acknowledgements.

What Is a SYN Flood DDoS Attack? | F5

What are IoT Devices – Arm®

What is a botnet? When armies of infected IoT devices attack | CSO Online

What is a DDoS Attack | DDoS Meaning | Kaspersky

Learn the difference between attack surface management and vulnerability management