Everything You Need to Know About HIVE Ransomware

In October 2021, we published a report naming the top five cyber security threats within the health care industry. In that report, we mentioned Hive being in the top ten global ransomware gangs for the third quarter of the year. Hive is infamously known for attacking healthcare facilities but has recently decided to make an even bigger name for themselves by attacking the retail industry and demanding one of the largest ransoms in cyber security history.

Ransomware continues to be a national security threat and ransomware gangs like BlackMatter, REvil, and DarkSide are constantly evolving, developing new tools, and changing tactics. Mimecast, a cloud security company, reported that the United States takes the lead when it comes to how much companies are willing to pay attackers following ransomware attacks. In a study where researchers spoke to 742 cybersecurity professionals, it was found that 80% of them were targeted with ransomware over the last two years – 39% of those cyber security professionals resorted to paying the ransom. 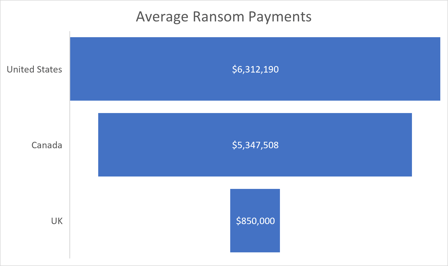 The FBI and CISA discourage companies from paying ransoms because it encourages cyber criminals to continue to attack organizations and demand ransom payments or fund illicit activities for cyber criminals. Unfortunately, when threat actors like Hive revise well-known ransomware tactics and become more detailed in their attacks, it’s hard for organizations to see any hope of recovering from an attack. Let’s take a look at Hive ransomware, their tactics, and why they are still a major concern for the healthcare industry and beyond.

Important Note: The ransomware gang is named Hive, as well as their ransomware. Therefore, the name Hive will be used interchangeably throughout this report. Researchers are not sure if Hive is a Ransomware as a Service platform or if Hive is a closed group.

hive and their tactics

Initially observed in June 2021, Hive operates as an affiliate-based ransomware gang. They have a variety of techniques and tactics that are challenging for cyber security professionals to defend and mitigate.

Over the years, analysts and researchers noticed that most ransomware threat actors focus on one platform, like Windows, to launch their attacks. Hive actually does the opposite and uses several platforms – Windows, Linux, and EXSi hypervisors. According to Adam Meyers, Vice President of CrowdStrike, the threat actor created the ability to run their ransomware against EXSi.

Hive’s ransom notes have a link to a “sales department” which allows victims to contact them through live chat – almost like customer service. Hive also uses Golang, a modern programming language that threat actors have been utilizing lately. Once in a system, Hive uses their tools to move laterally within that system and escalate privileges to steal and encrypt files.

The threat actor’s focus is faster payment, and they achieve this by increasing pressure on their victims by stealing their data before encrypting it. One of the ways Hive is able to gain access to their victim’s data is by sending out phishing emails with malicious attachments and by hijacking the Remote Desktop Protocol (RDP).

ESET Research Labs identified Linux and FreeBSD variants of Hive ransomware. This means that the threat actor is looking to attack other operating systems as well as cloud apps. The Linux and FreeBSD variants are written in Golang, however, their malware still has some bugs in it and has yet to be exploited. John Bambenek, the principal threat hunter at NetEnrich, stated that it isn’t unusual for a threat actor’s imperfect malware to be in the wild. Hive appears to be shifting platforms by targeting public facing systems like Linux – a system that is commonly used for web-servers. They’re hoping to cause a significant impact on the lives of their victims by compromising Linux and giving the victims more of an incentive to pay their ransom demands.

Cyber security analysts are not shocked to see the evolution of ransomware. It’s evolved to now include operating systems like Linux, Mac iOS, and VMware EXSi. More organizations are starting to embrace the digital world and are securing their data center to the cloud. Attackers know this and are using that to their advantage.

“Cloud applications that are now running on non-Windows operating systems such as Linux, are also under attack from these cyber criminals. For many years, Linux was thought to be a safe haven from common malware and ransomware attacks due to a smaller percentage of organizations utilizing it. However, that has finally changed with cyber criminals expanding their attacks into new operating systems spaces." – Chuck Everette – Director of Cyber Security Advocacy at Deep Instinct

The Linux version of Hive ransomware may still have a few kinks in it, but there is no doubt that the gang will continue to develop the malware because of the potential opportunities it will provide. Because the original ransomware is written in Golang (which is a cross-platform), the majority of the encryption code won’t need too much modification to run in a Linux environment.

In November 2021, Hive attacked Europe’s largest consumer electronics retailer, MediaMarkt. The company’s servers and workstations were encrypted by Hive and their IT systems had to be shut down to prevent further spread. The attack affected numerous stores throughout the Netherlands and other countries within Europe. The company was still able to function online, but the brick-and-mortar stores were not able to accept credit cards or print receipts. As a result, the stores had to disconnect their cash registers from the network.

After encrypting MediaMarkt’s server, Hive demanded that the company pay $240 million in ransom for decryption– a number that has since been reduced to a fraction of that number ($50 million in bitcoin). It’s common for ransomware gangs to demand an extremely high initial ransom to negotiate a much lower (but still profitable) amount. As of now, there are no public reports confirming that the company paid the ransom.

This is not the first time Hive has wreaked havoc on a large enterprise. In August 2021, the ransomware gang attacked Ohio’s non-profit, Memorial Health System, forcing the staff to work from paper charts - disrupting scheduled surgeries.

Additionally, researchers from AdvIntel reported that Hive recently compromised the networks of the third largest medical facility in Saxony-Anhalt. An insider confirmed that Hive estimated the organization’s revenue to be $272 million. Operators of the ransomware gang mentioned that because they attacked a healthcare facility, it’s likely that they will quickly pay the ransom. Attackers know the information within the healthcare industry is the most valuable information and goes for hundreds of dollars on the black market.

In early November, the FBI released a report about threat actors using significant time-sensitive financial events (mergers, stock valuation, and acquisitions) against organizations. Threat actors are starting to research major financial transactions between companies as leverage. If victims don’t pay up, the threat actor will threaten to disclose the information publicly, which causes investor backlash.

In early 2020, a ransomware gang called Unknown posted on a Russian hacking forum encouraging members to use the NASDAQ stock exchange to influence the extortion process. Following the posting, threat actors began negotiating payment with the victim and mentioned the victims’ stocks. The attacker threatened to leak the victim’s data to NASDAQ if they refused to negotiate a ransom. Between March and July 2020, there have been at least three publicly traded U.S companies who were victims of ransomware attacks during their mergers or acquisitions.

While there are no official statements surrounding the reason behind MediaMarkt’s attack, we do know that in 2017, the once independent retailer was acquired by a retail company now known as Ceconomy AG. We also know that prior to this acquisition, MediaMarkt was owned by German billionaire, Erich Kellerhais.

Ceconomy AG, a retail company formed through a demerger of Metro Group, owns, and operates MediaMarkt. They also operate more than 1,000 consumer electronics stores in 12 countries and 35% of their sales are generated online. MediaMarkt is Europe’s largest consumer electronics retailer and employs 53,000 people. The company’s total sales equal €20.8 billion.

Research from the U.S. Financial Crimes Enforcement Network (FinCEN) discovered that payments linked to ransomware attacks amount to $590 million. This exceeds the total for 2020 and is continuing to rise. Because the cyber landscape is always changing, it’s imperative to be aware of new cyber attack strategies and techniques. Avertium is here to keep you informed and to keep your organization safe. We recommend the following for the best protection against ransomware attacks:

Recommendations from Avertium and our partner, Advanced Intelligence:

Recommended mitigations for Hive ransomware from the FBI:

If your organization is impacted by a ransomware attack, the FBI and CISA recommend the following:

Because cyber criminals are beginning to do their homework on large financial transactions between companies and are using that information as ammunition, the FBI published a list of recommendations for organizations to consider implementing:

EXSi Hypervisors – a hypervisor is a virtual machine monitor or VMM. It’s a type of virtualization software that supports the creation and management of virtual machines by separating a computer’s software from its hardware. EXSi partitions hardware to consolidate applications. It also minimizes hardware resources needed to run the hypervisor.

Ransomware – malicious software that infects a device and stops users from accessing data and files until a ransom is paid.

Phishing Emails – when attackers send emails to victims containing malicious links and files. The emails are designed to scam people into revealing sensitive information that can be used for an attackers’ financial gain.

What is a Bare Metal Hypervisor? | VMware Glossary

Why Hive Attacks Are the Latest Menace to Healthcare Sector (govinfosecurity.com)

What is the Remote Desktop Protocol (RDP)? | Cloudflare

What Is Phishing? - Definition, Types of Attacks & More | Proofpoint US

The Top 5 Cyber Threats in the Healthcare Industry (avertium.com)

learn how to stay vigilent with cybersecurity during the holidays