Everything You Need to Know About the APT, Fancy Bear Since 2008, the Russian APT Fancy Bear (also known as APT28), has used fear and social engineering to trick victims into opening malicious email attachments or click on malicious links. They are known for several disruptive cyber attacks that go beyond the United States. Previously known for their low-key intelligence gathering, Fancy Bear made headlines in 2016 when they sent spear-phishing emails to members of the Democratic National Committee (DNC). The emails tricked victims into changing their email passwords on a fake webmail domain. As a result, credentials were stolen and used to gain access to the DNC network, install malware, and steal data – data that was later leaked online.

The 2016 DNC attack took place during the U.S. presidential election and was the start of the threat actor pivoting from being less visible to extremely visible. Their goal appeared to be to unsettle and weaken victim organizations and countries. Now, Fancy Bear is back to their old tricks – this time impacting Ukraine. Let’s take a look at Fancy Bear’s tactics and techniques, how they’ve victimized Ukrainians, and why zero-day vulnerabilities should be watched even after the hysteria subsides.

Fancy Bear, also known as APT 28, Sofacy, or Swallowtail, is a cyberespionage group that is linked to the Russian government. The group has been in operation since 2008, targeting the energy, government, media, aerospace, and defense sectors via phishing campaigns and credential harvesting. Fancy Bear is known to target both computers and mobile devices, running multiple intrusion operations concurrently.

In 2016, Fancy Bear was front and center after they attacked the Democratic National Committee (DNC). The group was also responsible for leaking confidential drug testing information after they attacked the World Anti-Doping Agency (WADA) during the same year. Fancy Bear took credit for the attack and leaked the stolen information on a site named “Fancy Bears”. Despite two very public attacks, Fancy Bear returned to the shadows in 2017. Since that time, the group’s activities have become clandestine, motivated by intelligence gathering.

Between 2017 and 2018, Fancy Bear targeted the following organizations:

After much attention, Fancy Bear became more discreet, and not much was heard from the APT until their recent attacks on Ukrainians. In July 2022, researchers from Malwarebytes observed malicious activity from the group. They were sending malicious documents that contained an exploit for the Microsoft zero-day, Follina (CVE-2022-30190).

If you recall, Avertium’s Cyber Threat Intelligence team issued an emergency Flash Notice for the vulnerability on June 1, 2022. The zero-day is exploited via specially crafted Office documents, even with macros disabled. Follina also allows attackers to run malicious code on targeted systems, as well as abuse the remote template feature in Microsoft Word to retrieve a HTML Template from a remote URL.

The zero-day was discovered by Nao Sec and the document they observed in the wild used Word’s external link to load the HTML and then used the “ms-msdt” scheme to execute PowerShell code. MSDT stands for Microsoft Support Diagnostic Tool, a tool that collects information and sends it to Microsoft Support. The ‘Protected View’ feature in Microsoft Office does prevent exploitation, but if a document is changed to RTF format, it will run without even opening the document.

The above technique is known as template injection and if an attacker is successful, they will be able to change view, delete data, install programs, and create new accounts in the context allowed by user’s rights. Although Microsoft had workarounds for Follina, they did not have a patch. Fancy Bear was able to exploit the unpatched vulnerability by sending Ukrainian victims phishing emails with a document titled “Nuclear Terrorism A Very Real Threat.rtf”. Since the war between Russia and Ukraine began, the people of Ukraine have been fearful that the war may become a nuclear holocaust. The malicious document includes an article from an international affairs group called Atlantic Council. The article speaks of the possibility of Putin using nuclear weapons in the war against Ukraine.

Once users open the malicious document, a new version of a .Net credential stealer is loaded onto their systems via Follina. Follina steals usernames, passwords, and URLs from Microsoft Edge browsers, as well as Google Chrome browsers. Although other groups and state-backed threat actors have exploited Follina, this is the first time researchers have observed an APT exploiting the flaw.

Microsoft has since released a patch for Follina, but not before other threat actors began exploiting it. Another group tracked as UAC-0098 targeted critical infrastructure in Ukraine with a tax-themed Follina document. The threat actors used Follina to drop the Cobalt Strike Beacon post-compromise attack tool. Another group used Follina to target media organizations in Ukraine. In April 2022, Fancy Bear was one of the five APTs CISA believed to be involved with attacks tied to campaigns designed to damage Ukraine’s digital infrastructure.

Fancy Bear’s tools are constantly in development, and they’ve used a number of tools to compromise their targets. The APT is well-known for registering malicious domains that almost mirror the domains of legitimate businesses and organizations. The spoofed domains are used to target their victims by providing the look and feel of a legitimate site, harvesting credentials once a victim clicks on their link.

According to Symantec, Fancy Bear’s primary malware is Sofacy. The malware has two components: Trojan.Sofacy and Backdoor.SofacyX. Trojan.Sofacy’s (also known as Seduploader) role is to perform basic reconnaissance on infected computers and download more malware. A second stage malware, Backdoor.SofacyX’s (also known as X-Agent) job is to steal information from infected computers. There is also a Mac version of the Trojan called OSX.Sofacy.

Fancy Bear has also re-developed tools over the past two years, including re-writing Trojan.Shunnael to .NET. Trojan.Shunnael is a malware the group uses to maintain access to infected networks using an encrypted tunnel. The APT maintains a persistent presence on compromised machines by using a Unified Extensible Firmware Interface (UEFI) rootkit called Lojax. This rootkit lives within the computer’s flash memory, allowing Fancy Bear to maintain persistence even if the hard drive of a compromised machine is replaced or the operating system is reinstalled.

How Does Fancy Bear Exploit Follina?

As we stated previously, Fancy Bear uses phishing emails to send a malicious RTF file called “Nuclear Terrorism a Very Real Threat.rtf”. The malicious document is an article that talks about how Putin will use nuclear war weapons in the war against Ukraine.

Fancy Bear uses a remote template embedded into the following file: Document.xml.rels. Then a remote HTML file is retrieved from the following URL: http://kitten-268[.]frge[.]io/article[.]HTML. After retrieval, the HTML file uses a JavaScript call to the following: window.location.href. This then loads and executes the encoded PowerShell script by using ms-msdt MSProtocol URI scheme. 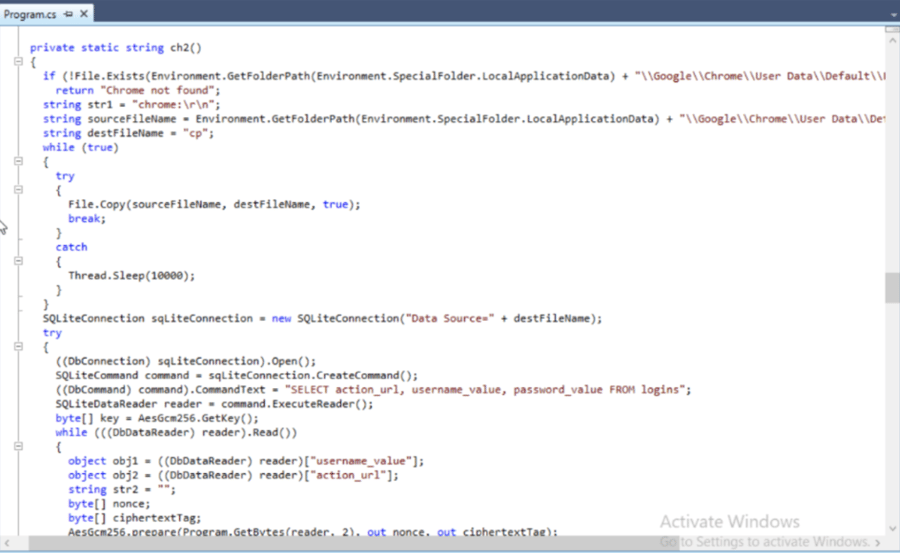 Finally, PowerShell loads the final payload, which is a variant of the .Net stealer that was identified by Google in previous campaigns against Ukraine. The .Net stealer’s objective is to steal passwords, usernames, and URLs from browsers. 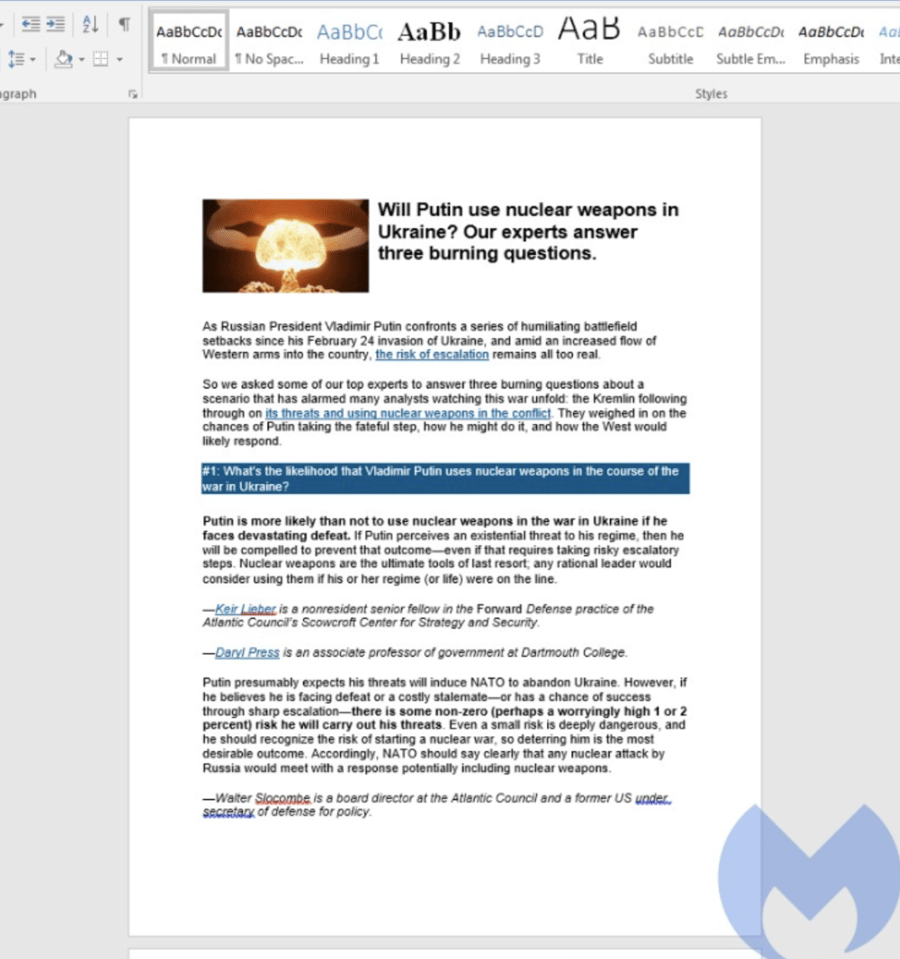 Links to Other Groups

Another group named Earworm has been observed gather intelligence against military targets since May 2016. Their targets include Central Asia, Europe, and Eastern Asia. They too use spear-phishing emails to compromise their targets and infect them with malware.

The group uses two tools, Trojan.Zekapab and Backdoor Zeckapab. Like the tools used by Fancy Bear, Trojan.Zekapab is used to carry out basic reconnaissance, while Backdoor.Zekapab is used to take screen shots, execute files and commands, upload and download files, and carry out system information tasks. On occasion, the espionage group has installed other tools for keylogging and password capture.

According to Crowdstrike, Fancy Bear mirrors the strategic interests of the Russian government. The group may also be affiliated with Russia’s premier military intelligence service, Main Intelligence Department (also known as GRU).

Common attack vectors for zero-days are web browsers, email attachments, and zero-day malware. Generally, the targets for these kinds of attacks include home internet users, as well as large and small enterprises with valuable data. Fancy Bear has certainly checked off all of these boxes.

Zero-day vulnerabilities, like Follina, are often hot topics when the news breaks but later get thrown onto the list of other zero-day vulnerabilities – never to be spoken of again until they’re exploited by threat actors like Fancy Bear. It’s vital for cyber security professionals to actively keep an eye on zero-day vulnerabilities even after the initial excitement of a zero-day dies down. Letting down your guard could mean letting an attacker into your system when you don’t have protections in place.
While sometimes, zero-day attacks are inevitable, there are zero-day best practices that your organization can implement consistently.

Zero-day attacks are scary and powerful, but they are not unstoppable. Organizations should adhere to a holistic cybersecurity strategy, not just patch and forget.

Although this report details the Russian APT Fancy Bear and how they use phishing emails to victimize Ukrainians, social engineering is not exclusive and is heavily used by threat actors when attacking organizations. It’s up to organizations to properly train employees on how to spot phishing emails. Some of the most obvious indications that you might be a phishing target include:

APTs like Fancy Bear use zero-day vulnerabilities in addition to targeted phishing campaigns to entice victims into opening malicious documents. Please don’t let your organization become a victim of a zero-day or a targeted campaign by not implementing zero-day best practices. In addition to practicing good cyber security hygiene, you can count on Avertium to provide the best services to help keep your organization safe.

Avertium and Microsoft recommend the following workarounds for Follina: