Active since 2013, the APT Aoqin Dragon flew under the radar for ten years before researchers at Sentinel Labs identified their activity. Aoqin Dragon’s primary focus is cyberespionage against targets in Vietnam, Cambodia, Hong Kong, Australia, and Singapore. Although the Chinese speaking threat actor is a small group, they are powerful and launched attacks against education, government, and telecommunications organizations while remaining invisible. Let’s take a look at Aoqin Dragon’s techniques, tactics, and how the group was able to go unnoticed for a decade. 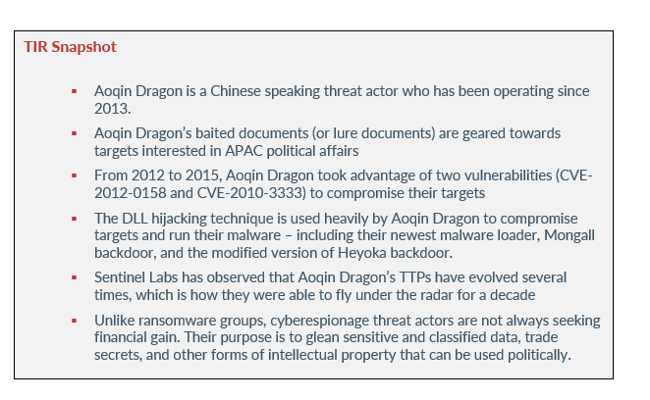 Aoqin Dragon is a Chinese speaking threat actor who has been operating since 2013. The group is known for using explicit themes to infect users, as well as using USB shortcut techniques to spread their malware and infect other targets. Aoqin Dragon’s infection chain can be divided into three parts. They include:

According to our technology partner, SentinelOne's research team, Sentinel Labs, Aoqin Dragon’s baited documents (or lure documents) are geared towards targets interested in APAC political affairs. The documents also are not specific to one country but the entirety of Southeast Asia. Sentinel Labs also stated that because the group stayed in systems and networks long-term and were consistent with their attacks, they can assess that Aoqin Dragon’s motives are purely cyber espionage with their activities aligning with Chinese government political interests.

Fake file icons and executable files have been used by varying threat actors over the years and is an effective tool for APTs like Aoqin Dragon. When combined with intriguing email content and a catchy file name, Aoqin Dragon can socially engineer their attacks and entice victims to click on a malicious file.

Since 2018, Aoqin Dagon has used fake removable USB device shortcuts as their initial point of infection. Victims who click on the shortcut icon will install a malicious loader, which contains two payloads. The first payload downloads the malicious files to removable devices for spreading and the second is an encrypted backdoor that creates a remote shell and uploads files to the victim’s machine. The second payload also downloads the files to Aoqin Dragon’s command and control servers. The encrypted backdoor also embedded three C2 servers for communication. Here is the attack chain of one of their most recent campaigns:

Aoqin Dragon also uses a custom backdoor that is more powerful than the previous one. The backdoor is a version of the Heyoka open-source project which uses spoofed DNS requests – creating bidirectional tunnel. Sentinel Labs stated that both backdoors have shell ability, but Heyoka is closer to a complete backdoor product.

Sentinel Labs stated that the main target type document formats Aoqin Dragon tries to find are Microsoft Word documents. Also, a script containing a “rar” command is embedded in the executable dropper with different fake security product icons. The dropper then employs a worm infection strategy using a removable device to infect malware into their victim’s device and breach their network.

As you can see the DLL hijacking technique is used heavily by Aoqin Dragon to compromise targets and run their malware – including their newest malware loader, Mongall backdoor, and the modified version of Heyoka backdoor. According to Sentinel Labs, the Mongall backdoor is a small backdoor that goes back to 2013 when it was discovered by ESET. At that time, the threat actor using Mongall was targeting the Telecommunications Department and the Vietnamese government. Since then, Aoqin Dragon has been seen targeting Southeast Asia with an upgraded Mongall encryption protocol and Themida packer. Mongall isn’t rich in features but it’s still quite effective due to its ability to create a remote shell and upload files to a victim’s machine.

The modified Heyoka backdoor is a different from Mongall and is based on the Heyoka open-source project. The backdoor was modified to be a custom backdoor using the DLL injection to deploy in the victim’s environment. The debug log for Heyoka contains simplified Chinese characters, which indicates that the APT is Chinese speaking.

Sentinel Labs has observed that Aoqin Dragon’s TTPs have evolved several times, which is how they were able to fly under the radar for a decade. The means they once used to infect their targeted devices has changed. During their first few years of operation, the threat actor relied on the previously mentioned CVE’s (CVE-2012-0158 and CVE-2010-3333). They were able to exploit these vulnerabilities due to their target’s negligence with patching.

In 2018, Aoqin Dragon changed the way they targeted devices by utilizing fake removable devices as their infection vector. They’ve also used other techniques to stay incognito, such as DNS tunneling. This technique involves the manipulation of an internet domain name system to bypass firewalls. Sentinel Labs reported that over time, Aoqin Dragon slowly executed their fake removable disc technique, which was done to keep their malware from being detected and removed by security products.

Researchers expect Aoqin Dragon to continue to conduct cyber espionage operations. They also expect the threat group to continue to advance their tradecraft and their methods for evading detection.

Unlike ransomware groups, cyberespionage threat actors are not typically seeking financial gain. Their purpose is to glean sensitive and classified data, trade secrets, and other forms of intellectual property that can be used politically. The attacks can be motivated by money, but this is not the case for cyber espionage groups most of the time.

Cyber Espionage groups generally target large corporations, government agencies, academic institution, and other organizations that have valuable intellectual property and technical data that can be used by another organization or government. Here is a list of assets cyber espionage threat actors attempt to access:

By obtaining access to the aforementioned list, threat actors can target organizations and wage a war between individuals, such as political leaders and government officials, as well as business executives. Most cyber espionage activity is placed under the advanced persistent threat (APT) umbrella. APTs are sophisticated and they generally establish an undetected presence on networks and systems so they can gather the information they need. Like Aoqin Dragon, cyber espionage APTs use social engineering to gather information from their target. Social engineering exploits human emotions (curiosity, fear, empathy, etc.) to trick victims into clicking on links or downloading malware.

Ransomware gangs and data extortion groups fall under the category for financially motivated attacks. They are motivated solely by money and their operations move much quicker than cyber espionage. These individuals operate like a business, going after a variety of industries such as healthcare, agriculture, government, education, and engineering. These threat groups usually do one of two things during their attacks: encrypt data and hold it ransom in exchange for a decryption key or exfiltrate data and threaten to leak it if a ransom is not paid.

Ransomware gangs like Conti and Hive are known for deploying ransomware into their victim’s networks and systems. While they may go undetected at first, they don’t stay that way for long and will expose themselves once they have encrypted their victims’ data or gathered the information they need. Once the ransom is paid, they will provide their victims with the decryption key or will keep their sensitive information from being exposed – although they don’t always keep their word.

Threat actors like Aoqin Dragon can gain unlimited access to networks and systems by remaining incognito for years, furthering reconnaissance. Avertium is here to keep your organization safe and to mitigate any attacks caused by APTs like Aoqin Dragon:

What is Cyber Espionage? – CrowdStrike