Roaming Mantis was introduced in March 2018 after the Japanese media reported the hijacking of DNS settings on routers located in Japan. The hijackers were redirecting users to malicious IP addresses which then led to the installation of Trojanized applications (facebook.apk and chrome.apg) that contained an Android banking trojan. What started off as a banking trojan, has quickly evolved into much more. Let’s take a look at Roaming Mantis and how mobile phishing campaigns develop into cyber threats for organizations.

Between February and April 2018, researchers at Kaspersky Lab detected the Roaming Mantis more than 6,000 times with reports coming from just 150 unique users. This information suggested a disturbing event for some users, who were experiencing the malware in their network over and over again. Kaspersky Lab observed that more than half of the detections were targeting the Asian region. Because of the propagation of the malware via smartphones roaming between Wi-Fi networks, carrying and spreading infections, Kaspersky Lab decided to call the malware Roaming Mantis. Compromised routers were used to infect Android tablets and smartphones.

DNS hijacking helps distribute Roaming Mantis. DNS hijacking is when a victim attempts to access a website by way of a compromised router and is immediately redirected to a malicious website. The malicious website typically displays a URL that appears to look like the one you’re trying to access, making you believe that it’s genuine. In Roaming Mantis’ case, when you go to the website, which is hosted on a rogue server, a popup message appears that asks you to update to the latest Chrome version for a better browsing experience.

When a device is booted via the internet, Roaming Mantis requests permission to be notified. After it receives the notification, it then gains access to account information, SMS/MMS and calls, audio records, external storage, etc.

After Roaming Mantis is successfully installed, it overlays all other windows, with one carrying a message in broken English: “Account No.exists risks, use after certification”. Then, Roaming Mantis starts its own webserver, rendering a spoofed Google authentication page. 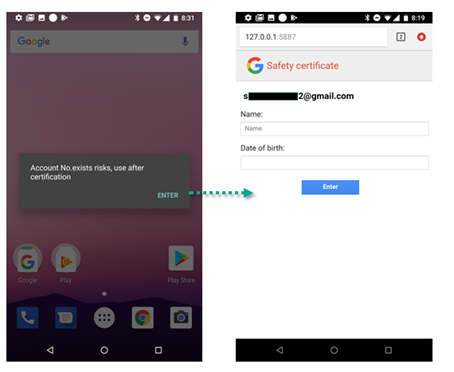 This page was designed to trick victims into giving the threat actors behind Roaming Mantis access to their user accounts and eventually permission that grants access to the one-time codes needed for two-factor authentication. After analysis, Kaspersky Lab discovered that the malware contained references to application IDs that are popular in South Korea and linked to mobile banking and games.

One month after Kaspersky Lab published their report about the malware, Roaming Mantis added two dozen more languages to their attack list and improved the malware to attack devices running iOS. In 2018, Roaming Mantis’ ultimate goal was to steal user and take control over compromised Android devices. At the time, the malware was most prevalent in South Korea, as Korean was the first language targeted in HTML. The DNS hijacking makes it difficult for victims to detect that they are being attacked by cyber criminals.

Fast forward to 2022, Roaming Mantis has expanded and is now attacking in France and Germany for the first time. This time, the goal for Roaming Mantis is to install Wroba (a banking trojan), which is spyware and banking malware. Wroba is capable of replacing real apps with malicious versions so that bank credentials can be stolen and used by threat actors – financial motivation.

Additionally, Roaming Mantis has now shifted from using Java as a programming language, to using Kotlin. There are also two new backdoor commands, allowing Wroba to exfiltrate galleries and photos from compromised devices. Why would anyone want random photographs? Have you ever taken a picture of your driver’s license, insurance card, or debit card? Threat actors are willing to sift through massive amounts of images if it means they can receive just one pay day. They will also use stolen photos to blackmail their victims.

Roaming Mantis infects devices by sending a SMS text message to their victim. The language within the text tricks the victim into thinking that they are receiving a shipped package confirmation. They are then led to click on a URL, which redirects them to a phishing page designed to steal the victim’s credentials.

For iOS victims, the application isn’t downloaded. Instead, the malicious site displays a phishing page asking the victim to log back into the App Store immediately. The address that’s used looks like a credible Apple site and attempts to reassure the victim that all is well.

Not long after directing victims to the spoofed page, the threat actors ask for bank card numbers. If you are using a desktop computer or laptop, Roaming Mantis runs the CoinHive mining script, which mines cryptocurrency and distributes it directly to the attackers.

If you recall, our Threat Intelligence Report featuring Norton 360’s built-in cryptominer, stressed how cryptocurrency mining can cause your computer to run slow and use enormous amounts of power. Threat actors run cryptocurrency miners on hacked computers, so they don’t have to use their own resources – thus eventually destroying their victims’ devices.

If an Android device is used, the victim will be redirected to a page that attempts to install malware disguised as an Android App. Here is a list of some of the apps used to deceive victims: 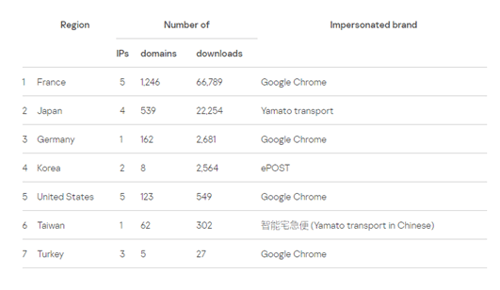 To evade detection, Roaming Mantis threat actors use different obfuscation techniques in the landing page script. For example, the malware is now using a new method for retrieving the C2 by using the email POP protocol, as well as a command to assist in identifying research environments. Additionally, Roaming Mantis added a feature that avoids blacklisting – automatic generation of APK per download.

Right now, the malware appears to target France, Japan, India, China, Germany, and Korea. Researchers expect Roaming Mantis to continue in 2022 due to strong financial motivation. The threat actors behind the malware have used various malware families such as Heur: Trojan-Dropper.AndoidOSWroba. and other attack methods like smishing, phishing, and DNS attacks.

Don’t become overconfident and assume that an attack like Roaming Mantis won’t happen to you. Express the importance of being aware of phishing campaigns to your employees, especially during the onboarding process for new hires. Because people use their devices as their primary browsing source, it’s important to share this information with your employees. Keep your cyber environment secure by inquiring about the following Avertium services:

To help prevent an attack

If your organization is attacked by Roaming Mantis