An In-Depth Look at the North Korean Threat Actor, ZINC

Since 2009, the North Korean threat actor ZINC (also known as Hidden Cobra by the U.S. government) has attacked organizations and individuals by way of highly sophisticated and evolving malware. The threat actor is a destructive, nation-state activity group that gained notoriety in 2014 when they attacked Sony Pictures Entertainment. The attack was in retaliation for the controversial film “The Interview”. The film was a satirical comedy about North Korean leader, Kim Jong Un.

ZINC is known for targeting security researchers, pen testers, and employees at security technology companies. In September 2022, Microsoft observed the threat actors targeting individuals from the Infosec community on social media platforms such as LinkedIn and Twitter. The threat actors spend months on social media platforms building their reputation before pulling the trigger on their targets. Let’s take a look at ZINC, their tactics and techniques, and how social engineering can fool those who were trained to recognize phishing attempts. 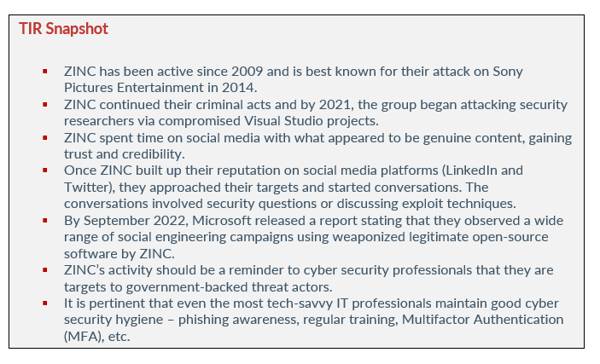 As we stated previously, ZINC has been active since 2009 and is best known for their attack on Sony Pictures Entertainment in 2014. The cyber attack led to the release of sensitive data about Sony employees, including financial records, salary information, Social Security numbers, and emails. The breach included four, non-released films and when the dust settled, the company lost millions of dollars. After the threat actors hacked Sony, they used the same aliases and accounts from the breach to send spear-phishing emails to several U.S. defense contractors.

The Visual Studio project attack revealed that ZINC was associated with the Democratic People’s Republic of Korea (DPRK). Security researchers determined the association based on tradecraft, infrastructure, malware patters, and account affiliations. Microsoft, who has been tracking ZINC for quite some time, stated that the campaign was ongoing and that the threat actors used a variety of new techniques to target the security researchers.

how did zinc build credibility AND TRUST?

ZINC (a sub-group of Lazarus) spent a lot of time during 2020 establishing a research blog and several Twitter profiles to interact with their targets. They used the Twitter accounts to post links to their blog, which contained videos of their faux exploits. The Twitter account had a following of roughly 2,000 and included many prominent security researchers. The account also retweeted high quality security content and posted about exploit research from the blog controlled by the threat actor. 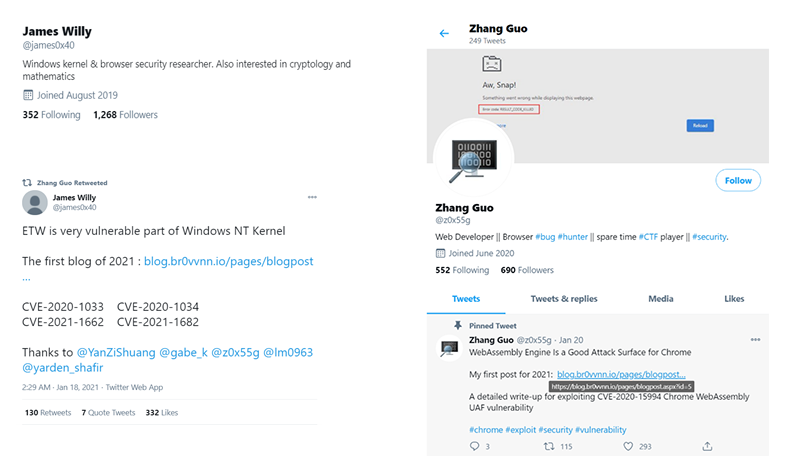 Once ZINC built up their reputation on social media platforms (LinkedIn and Twitter), they approached their targets and started conversations. The conversations involved security questions or discussing exploit techniques. If the target responded to the attacker positively, ZINC would try to lure them to another platform (Discord, email, etc.) or send files using encrypted or PGP protected ZIPs.

Because ZINC posted links to their bogus security blog within their Twitter posts, the links were retweeted and shared on other social media platforms by security professionals who followed them, as well as those who did not. In October 2020, a blog post titled DOS2RCE: A New Technique to Exploit V8 NULL Pointer Deference Bug, was shared by ZINC on Twitter.

Security researchers who weren’t contacted or sent files by the threat actor clicked on the links while using the Chrome browser. As a result, ZINC malware ended up on their machines. Although not confirmed by researchers, this chain of events indicates that a Chrome browser exploit chain was hosted on the blog. It was further suspected (but not proven) that because some of the victim’s browsers were not patched, the exploit chain used 0-day or patch gap exploits.

By September 2022, Microsoft released a report stating that they observed a wide range of social engineering campaigns using weaponized legitimate open-source software by ZINC. The threat actor was seen targeting employees within media, defense and aerospace, IT, and IT services. The countries of their targets are in the U.S., Russia, the UK, and India.

In June 2022, Microsoft observed ZINC using social engineering tactics to connect with individuals on LinkedIn – once again establishing trust and credibility. After successful communication and establishing trust, ZINC lured their targets off LinkedIn and onto the messaging app WhatsApp. The app acted as a vehicle to deliver malicious payloads. In addition to weaponizing WhatsApp, ZINC also weaponized a wide range of open-source software including KiTTY, PuTTY, TightVNC, Sumatatra PDF Reader, and muPDF/Subliminal Recording software installer for their attacks.

Since June 2022, ZINC has compromised numerous organizations and has attempted to move laterally and exfiltrate data from victim networks. Microsoft stated that because of the wide use of platforms and software ZINC utilizes in their LinkedIn campaign, they could be a serious threat to organizations and individuals across various sectors and regions.

ZINC has been tracked by other security companies (Black Artemis, and Labyrinth Chollima) and uses a variety of custom remote access tools or RATs, including FoggyBrass and PhantomStar. Although the group has launched attacks for various reasons, their attacks are similar to state-sponsored activities such as evolving and sophisticated malware, heightened operational security, and politically motivated targeting. 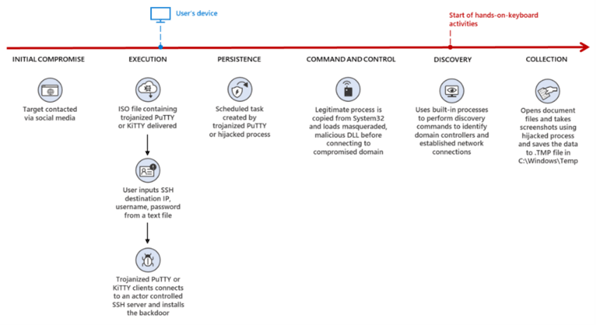 Additionally, Microsoft stated that they observed at least five methods of Trojanized open-source applications containing the ZetaNile malware family. Implant DLLs in the ZetaNile malware are either encrypted using custom algorithms or packed with commercial software protectors such as VMProtect and Themida. Once ZINC establishes a connection with their target, they operationalize malicious versions of two SSH clients – PuTTY and KiTTY. The SSH clients act as the entry point for the ZetaNile implant. It is important to note that the malicious versions of PuTTY and KiTTY are not official and are from disreputable sources. Therefore, they would not match the signatures of the real thing. This is why one should ALWAYS verify files.

PuTTY was Trojanized by ZINC and used as a part of their attack chain for years before they started using KiTTY. According to Microsoft, the most recent variant of ZINC’s Trojanized PuTTY establishes persistence on compromised devices by utilizing scheduled tasks.

“Both utilities provide terminal emulator support for different networking protocols, making them attractive programs for individuals commonly targeted by ZINC. The weaponized versions were often delivered as compressed ZIP archives or ISO files. Within that archive, the recipient is provided a ReadMe.txt and an executable file to run.” – Microsoft

Microsoft explained that in order for ZetaNile to be deployed, the SSH utility requires the IP provided in the ReadMe.txt file – this helps ZINC evade traditional security defenses. Once ZINC is able to persuade victims to move from LinkedIn to WhatsApp, they deliver the ZetaNile malware to their victims. As we stated above, ZINC used PuTTY in the past, but they have recently started using KiTTY as well. ZINC has expanded their capabilities and they have started to weaponize KiTTY, which is a fork of PuTTY.

After the executable collects the hostname and username of the victim’s system, it sends the information to a hardcoded IP address over TCP/22. Once there is a successful TCP connection to the server, the KiTTY executable deploys the malware as %AppData%\mscoree.dll followed by several rounds of decoding. 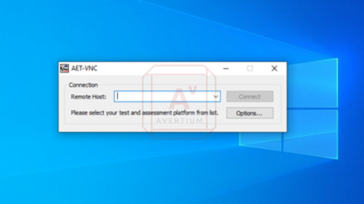 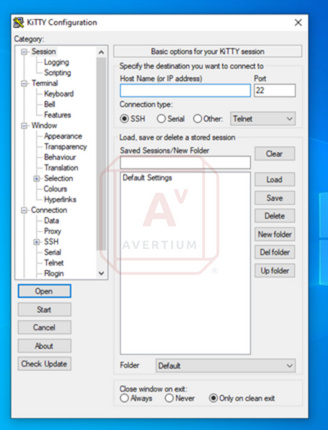 ZINC’s activity should be a reminder to cyber security professionals that they are targets to government-backed threat actors. Security professionals should always remember to remain vigilant when engaging with individuals they have not previously communicated with on social media platforms.

LinkedIn Threat Prevention and Defense observed ZINC creating profiles and pretending to be technology, defense, and media entertainment recruiters with the goal of moving their targets off LinkedIn and on to WhatsApp for delivery of malware. Technical support professionals and engineers working at information technology and media companies were the primary targets for ZINC.

The threat actors sent outreach to each target and tailored it to the individual’s profession or background. They then were encouraged to apply for an open position at legitimate companies. When LinkedIn learned of the fraudulent activity, they terminated accounts associated with the threat actor.

However, LinkedIn could not terminate those accounts before unknowing victims were compromised. Security professionals are trained to spot phishing attempts, hacking attempts, and other malicious threats. However, even the most educated security professional can fall victim to a highly sophisticated threat actor like ZINC. When social engineering is combined with highly targeted spear phishing, it can be difficult to spot.

It's pertinent that even the most tech-savvy security professionals maintain good cyber security hygiene – phishing awareness, regular training, Multifactor Authentication (MFA), etc. Engineers that communicate with individuals for the first time on social media platforms need to be especially careful due to their positions often being associated with privileged access.

If you are recruited by a tech company that asks you to download archives from WhatsApp (or another encrypted messaging app) and run custom executables, this should be seen as alarming. Keep in mind that a large company or startup has other ways to assess job candidates.

Social engineering happens when threat actors like ZINC influence or manipulate victims so they can gain control over their computer system. The threat actors who use social engineering don’t discriminate and anyone can fall victim to their tricks, including cyber security professionals. The same best practices that cyber security professions stress to those outside of the industry, are the same best practices they should adhere to. Some of the most obvious indications that you might be a target of social engineering include:

Things to avoid on social media:

ZINC’s techniques can be mitigated by adopting the security considerations provided by Microsoft:

Unfortunately, there is a chance that ZINC is successful in their social engineering attack. However, there are things you can do to thwart the attack from getting any further:

How Hacker's Use Social Media For Social Engineering Attacks (usecure.io)