In October 2022, Uber suffered a security breach, and an attacker was able to access Uber’s user data that was stored on a third-party server. After gaining access to Uber’s internal network and Slack server, the attacker harassed employees while bragging about Uber’s systems being hacked. Prior to the attack, the same attacker used Slack to send messages regarding higher wages for Uber drivers. Because the incident couldn’t be mitigated by IT workers, it made it next to impossible for Uber drivers to fulfill their jobs.

After the security breach, Uber released statements saying that all of their services were fully functional, and that customer data was not compromised. While this was a relief to customers and stakeholders, there was still confusion regarding how the breach happened in the first place. The answer includes social engineering, Multi-Factor Authentication (MFA) fatigue, and breached credentials.

Despite Uber being at the forefront of the MFA attack, they would not be the only large company to suffer from a cyber attack in this manner. Let’s take a look at MFA attacks and what organizations can do to move toward better protection. 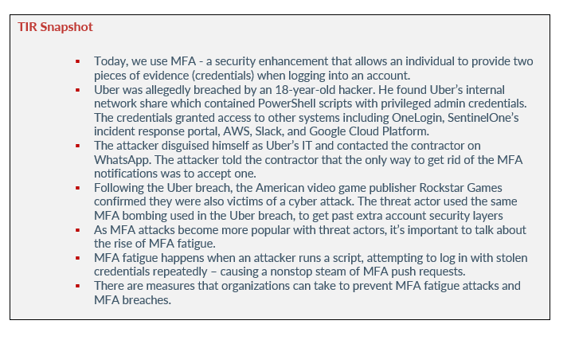 Before we dig into MFA attacks, let’s talk about MFA in general. In the past, most people logged into banking accounts, school accounts, mobile phone provider accounts, and other confidential service accounts by entering a simple username and password. For a while that method worked until attackers started to guess passwords (likely re-used by the user on several sites) and brute force their way into accounts.

Now, we use something called Multi-factor Authentication or MFA. MFA is a security enhancement that allows an individual to provide two pieces of evidence (credentials) when logging into an account. Credentials can be any of the following: something you have (a credit card), something you know (a PIN number), somewhere you are (a location) or something you are (face ID).

To enhance security, the credentials must come from two separate categories – like typing your username and password on one screen, then using an authenticator app on your mobile device as a second factor to generate a one-time code that you enter on a different screen before being officially logged in. In some cases, if you come back to a site and use the same device, it will be remembered as the second factor.

MFA provides an extra layer of security and keeps your information that much more safe as a thief would need to steal both your password and your phone. This would make it extremely difficult for a cyber criminal since you would notice if your phone went missing and likely report it before anyone could log into an account with MFA enabled. Because cybercriminals use malware, phishing attacks, and brute-force to steal user information, every extra layer of security can help keep them from breaching individuals and organizations.

In September 2022, Uber was allegedly breached by an 18-year-old hacker who goes by the name “Tea Pot”. The hacker tricked an Uber employee (social engineering) into giving him account access and accepting an MFA prompt, allowing the hacker to register their own device. After gaining a foothold, the attacker found Uber’s internal network share which contained PowerShell scripts with privileged admin credentials. The credentials granted access to other systems including OneLogin, SentinelOne’s incident response portal, AWS, Slack, and Google Cloud Platform.

Following the breach, the Singapore based cyber security firm Group-IB, confirmed that on September 16, 2022, vx-underground posted screenshots with access to Uber’s internal systems. The screen shots were posted by a user named “teapots2022”. After analysis, the firm’s researchers found two files which were identified as logs from stealers sold on the dark web.

The logs were then put up for sale on September 12th and 14th, indicating that the data was fresh due to the attack that utilized them being revealed between September 15th and 16th. According to Group-IB, the logs contained authorization data for uber.onelogin.com, an identity and access management provider. Researchers also stated that due to the screen shots, the attacker could have purchased logs to enable them to sort through accounts and find accounts with privileged access to internal network resources.

Group-IB stated that the other logs contained access credentials to other resources, including Facebook, Slack, Google, and Instagram. The credentials could have been used by the threat actor to move through Uber’s network via social engineering. Uber’s breach was made successful via MFA fatigue.

Lapsus$ has also been successful with attacking large organizations via MFA fatigue. At the end of March 2022, Lapsus$ breached the software services firm, Globant, and dumped a 73GB archive of stolen data. Globant provides software services for brands such as Google, Disney, and Electronic Arts. The group also was responsible for breaching T-Mobile in April 2022 and stealing their source code. Kevin Beaumont observed the threat actors posting the below messages in their Telegram channel.

Following the Uber breach, the American video game publisher Rockstar Games confirmed they were also victims of a cyber attack. The attack involved an unauthorized user illegally downloading non-released footage of Grand Theft Auto VI. The breach didn’t disrupt the company’s live game services and didn’t have an impact on the development of ongoing projects, but the attacker accessed confidential information.

The data accessed contained almost 90 videos of clips from the game and was leaked over the weekend by a familiar source with the following username – “teapotuberhacker”. In a forum message, the attacker said that the videos were downloaded from Slack. This confession indicates that the threat actor used the same MFA bombing he used in the Uber breach, to get past extra account security layers. In another message in the forum, the attacker stated that he would leak more if Rockstar didn’t pay him – his ultimate goal being financial gain.

By November 1, 2022, Dropbox informed the public that the company suffered from a data breach and threat actors gained access to some source code and sensitive information belonging to customers and employees. The company actually learned about the breach in October 2022 after being informed by GitHub.

Not long after alerting Dropbox of their breach, GitHub learned that they too were the victims of a cyber attack. Some of GitHub’s users were targeted in a phishing campaign that impersonated the integration and delivery platform, CircleCI. Their goal was to obtain credentials and two-factor authentication codes. Similarly, the threat actors behind Dropbox’s breach sent phishing emails to several employees. The emails directed them to bogus CircleCI websites intended to glean credentials and passwords for MFA.

The threat actors were able to successfully access one of Dropbox’s GitHub organizations and copied 130 code repositories. Dropbox explained that the repositories included copies of third-party libraries slightly modified for use by Dropbox, as well as internal prototypes. Also, user payment information, passwords, and developer credentials were exposed.

How did the threat actors manage to breach the organizations? According to Security Week, the attackers phished for one-time passwords generated by employee hardware authentication keys. Although hardware authentication keys are considered more secure, Dropbox stated that the ones they used were not the best and they needed to develop a more phishing resistant MFA – something that combines WebAuthn with hardware tokens or biometric factors.

As MFA attacks become more popular with threat actors, it’s important to talk about the rise of MFA fatigue. One of the most common ways threat actors breach corporate networks is via stolen employee login credentials. It doesn’t take much for threat actors to obtain these credentials – dark web forums, malware, and phishing attacks are just a few of the ways malicious actors get what they want.

Most large corporations know that threat actors are looking for any way possible to breach their networks, and most make sure that their networks and systems are safe by enforcing MFA amongst staff and third-party vendors. As we stated previously, MFA is an extra layer of security that prevents users from logging into a network without entering an additional form of verification.

Yes, there are ways threat actors bypass MFA, but most methods include man-in-the-middle phishing attack frameworks or stealing cookies through malware. Lately, threat actors have adopted a new way of bypassing roadblocks and that is through MFA fatigue or MFA push spam. This technique doesn’t require malware or even phishing infrastructure but has been quite successful for various threat actors. 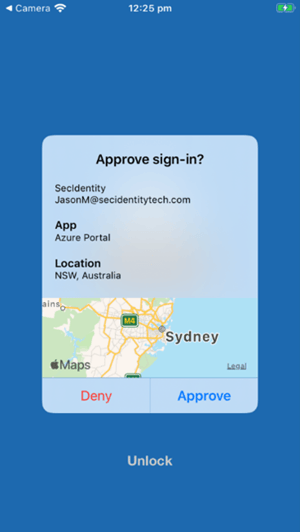 When organizations implement MFA and configure “push” notifications, the employees see a message on the mobile device asking them to confirm if it’s them who is trying to log in using their credentials. MFA fatigue happens when an attacker runs a script, attempting to log in with stolen credentials repeatedly – causing a nonstop stream of MFA push requests. The goal is to keep sending these push notifications day and night until the victim on the receiving end of the requests breaks down and accepts the request or accidentally hits the “approve” button.

In some cases, an attacker will send the requests, then follow up by contacting the victim through email or other messaging platforms pretending to be IT support. This is done to try and convince the victim to accept the MFA prompt (i.e., Uber’s contractor). This kind of social engineering has been successful with threat actors like Lapsus$ and Yanluowang. The threat actors have breached large organizations such as Cisco, Uber, and Microsoft.

What can Organizations do?

When MFA fatigue attacks happen, most people don’t realize they are the target of a cyber attack. Instead, they get confused and think that their device is glitching or that maybe they did try to sign in to one of their accounts but forgot. This kind of attack can be scary for organizations because most of the time it goes undetected until a breach takes place.

However, all hope is not lost. There are measures that organizations can take to prevent MFA fatigue attacks and MFA breaches. Cyber security professionals such as Kevin Beaumont state that there are other ways to authenticate users that are more effective, including but not limited to: 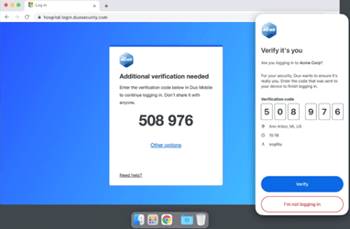 If you want to continue to keep your organization safe, Avertium highly recommends that your organization consider implementing one of the above recommendations in addition to utilizing Avertium’s services. Avertium has the tools to assess your cyber environment and to provide a deeper understanding regarding why it’s important to maintain excellent cyber security posture. 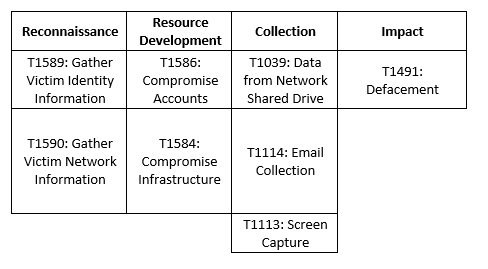 Back to Basics: What’s multi-factor authentication - and why should I care? | NIST

What is MFA (Multi-Factor Authentication)? Learn How it Works | UpGuard

What the Uber Hack can teach us about navigating IT Security (bleepingcomputer.com)

What is FIDO? - FIDO Alliance