In February 2022, CISA, the Federal Bureau of Investigation (FBI), the U.S. Cyber Command Cyber National Mission Force (CNMF), the United Kingdom’s National Cyber Security Centre (NCSC-UK), and the National Security Agency (NSA) released a joint statement regarding their observation of Iranian government-sponsored APT MuddyWater and their malicious cyber activity. MuddyWater is known for cyber espionage, as well as other cybercriminal operations as part of Iran’s Ministry of Intelligence and Security.

MuddyWater conducts broad cyber campaigns, exploiting publicly reported vulnerabilities and using open-source tools and strategies to gain access to their target’s systems. Let’s take a look at MuddyWater, their tactics, and their techniques, as well as the current state of cyber espionage.

Also, known as MERCURY, Earth Vetala, Static Kitten, Seedworm, and TEMP.Zagros, MuddyWater is an Iranian APT and a subservient element within the Iranian Ministry of Intelligence and Security (MOIS). The group has been active since 2018 and has provided stolen data and access to the Iranian government by exploiting known vulnerabilities and using open-source tools to deploy their ransomware.

MuddyWater uses several malware variants such as PowGoop, Canopy, Small Sieve, POWERSTATS, and Mori. MuddyWater also uses malicious documents to deploy Remote Access Trojans (RATs) on vulnerable systems. According to Cisco Talos, MuddyWater plants a malicious macro in their documents that, once triggered, drops two WSF files on the endpoint. Additionally, MuddyWater uses DNS to contact the command and control (C2), while original contact with hosting servers is done via HTTP. PowerShell and Visual Basic scripting are used for their initial payload, in addition to LoLBins to assist in the initial stages of infection.

MuddyWater hosts the maldocs on attacker-controlled or public media-sharing websites which are downloaded by malicious PDFs. The PDFs are distributed via email and are designed to trick targets into downloading and opening them. Research shows that MuddyWater uses malicious PDFs as their entry point for their attacks. Additionally, a set of malicious Excel spreadsheet files were seen distributed with Turkish names, some masquerading as legitimate documents from the Turkish Health and Interior Ministries.

As stated above, the delivery method for MuddyWater’s malware is done by distributing malicious PDFs with embedded links. The first stage includes the target trying to open the PDF file, which then displays an error message that asks the target to click on a link to resolve the issue. After clicking the download button, the endpoint receives a second stage which is a Windows executable or a malicious XLS file. 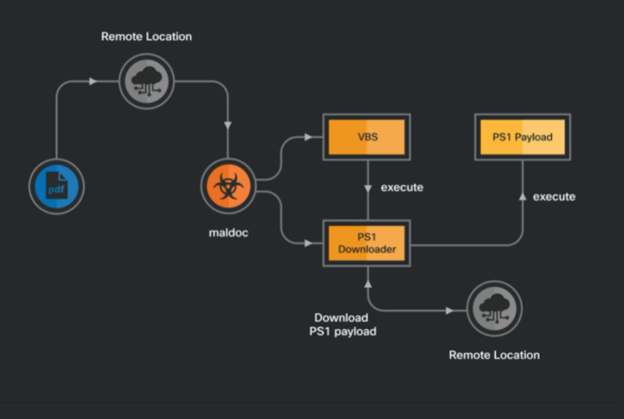 Sometimes, MuddyWater uses decoy documents in the executable-based threat vector with content that’s similar to the original PDF files disseminating the maldocs and executables. Malicious PowerShell scripts are downloaded and executed once the victim opens the document. In this infection chain, intermediate VBS scripts are replaced with a PowerShell implementation, which creates a directory in the victim’s home folder. There are two PowerShell scripts stored in the directory:

In August 2021, MuddyWater deployed another version of the executable and targeted Pakistani entities. This version also included a decoy document followed by the use of a PowerShell-based downloader script. The Registry run key is used for persistence. It’s unclear if the Turkish attacks in November 2021 were a continuation of Pakistani-related activity.

In April 2021, MuddyWater was observed deploying a RAT and the EXE-based infection vector from the Pakistan attack. They were also seen targeting Armenia in June 2021 using the same types of Windows executable files. All of the above campaigns used an implementation of signaling tokens. 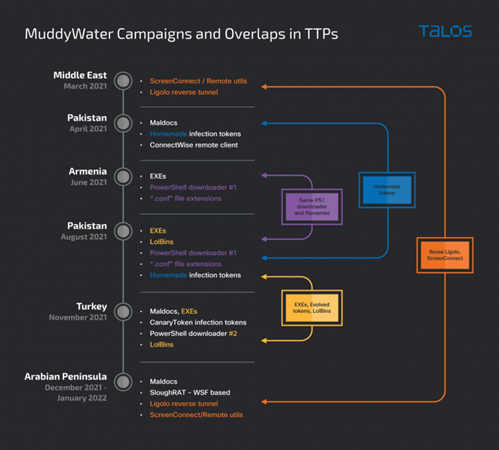 is the Iranian APT "muddywater" a single actor?

Because MuddyWater has used a variety of lures and has targeted different geographic regions, cyber analysts are saying that MuddyWater is more than likely a conglomerate of subgroups and not a single threat actor. The sub-groups that Cisco Talos observed appear to operate independently and are motivated by espionage, intellectual theft, and destructive or disruptive operations based on their victims.

The Turkish, Pakistan, and other campaigns researchers observed, involve the same TTPs - which is evidenced by the gradual adoption of various techniques over time within the campaigns. Cisco Talos believes there are links between the various campaigns, including MuddyWater’s migration of “techniques from region to region, along with their evolution into more advanced versions.”

Most nation-state threat actors’ goal is cyber espionage, which makes them a serious threat to the U.S. and other countries. We previously mentioned that cyber espionage is primarily politically motivated and today’s threat landscape is seeing this kind of cyber attack more frequently.

In July 2019, four members of the group were charged with attacking governments, universities, and various companies across the globe on behalf of the Chinese government. The four suspects were a part of a much larger operation that set up a company (Hainan Xiandun) as a front for their attack campaigns. According to the Intrusion Truth blog, Hainan Xiandun was under the direction of the Chinese Ministry of State Security (MSS), and an employee, Wu Shurong, worked as a hired hacker for the company. Shurong created malware and used it to compromise computer systems belonging to universities, governments, and companies.

The other three suspects were MSS officers who worked for the Hainan provincial department, their names are Ding Xiaoyang, Cheng Qingmin, and Zhu Yunmin. The U.S. alleged that the MSS has directed Bronze Mohawk’s attack campaigns since 2011 – directing them to steal confidential business information for dissemination in China. Bronze Mohawk’s attacks were conducted for the sole purpose of leaking sensitive information.

In 2021, President Biden stated that one of his goals was to strengthen the nation’s cyber security and bring other countries together to combat cybercrime and improve law enforcement cooperation. President Biden also acknowledged that securing supply chains and maintaining strong cyber security best practices should be continued work. This statement came after the attack on Kaseya – a supply chain ransomware attack conducted by REvil. Although the Kaseya attack was a ransomware supply-chain attack, supply chain attacks and nation-state threat actors are often linked.

In March 2022, the FBI stopped the Russian-state Cyclops Blink botnet from attacking the U.S. Cyclops Blink is a modular malware that infects internet-connected devices via firmware updates – targeting WatchGuard and ASUS devices. Cyclops Blink is controlled by the Russian Federation’s Main Intelligence Directorate and has compromised thousands of devices worldwide to date.

At the end of 2021, Security Week published an article stating that cyber espionage will remain a primary motive for nation-state adversaries in 2022.

Threat actors like MuddyWater can gain unlimited access to networks and systems, furthering reconnaissance. Avertium is here to keep your organization safe and to mitigate any attacks caused by APTs like MuddyWater: