An In-Depth Look at Play Ransomware

Play ransomware (also known as PlayCrypt) is a new ransomware operation that launched in June 2022. The operation has amassed a steady stream of victims across the world. Play has recently been in the news for attacking Argentina’s Judiciary of Cordoba and the German hotel chain “H-Hotels”. Play’s attacks focus on organizations in the Latin American region – Brazil being their primary target. They have also been observed deploying attacks on India, Hungary, Spain, and the Netherlands.

Play is known for their big game hunting tactics, such as using Cobalt Strike for post-compromise and SystemBC RAT for persistence. They have recently started exploiting the ProxyNotShell vulnerabilities in Microsoft Exchange. The group also has similar tactics and techniques to the ransomware groups Hive and Nokoyawa, leading researchers to believe Play is operated by the same people. Let’s take a look at Play ransomware, their tactics and techniques, as well as how organizations can protect themselves from this kind of threat actor.

Play was discovered in June 2022 after several victims of their ransomware attacks appeared in Bleeping Computer forums. Play’s ransomware name stems from its behavior, as the extension .play is added after file encryption. The ransomware note left behind also contains the single word PLAY, as well as the group’s contact email address.

Not long after victims started reporting attacks in Bleeping Computer forums, Play targeted Argentina’s Judiciary of Cordoba. The attack took place in August 2022 and the Judiciary had to shut down their IT systems, as well as their online portal as a result. The Judiciary was forced to use pen and paper for submitting official documents. The Argentinian publication, Clarin, reported that the attack was the “worst attack on public institutions in history.”

Although the Judiciary did not go into detail, journalist Luis Ernest Zegarra confirmed via Twitter that the Judiciary was hit by ransomware that appends the .play extension to encrypted files. The ransomware note that Play leaves behind is not lengthy and is unusually simple. The note is only made at the root of a hard dive (C:\) and only contains the word PLAY and an email address for victims to contact. This kind of simplicity is not usual for ransomware operators. 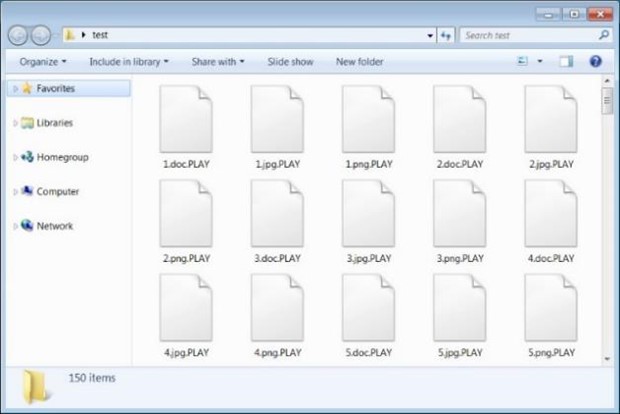 Although not confirmed, researchers suspect that Play was able to breach the Judiciary via a list of leaked Globant employee email addresses. The attack on Globant took place in March 2022 and the leaked email addresses may have allowed Play to launch a phishing attack to steal credentials. 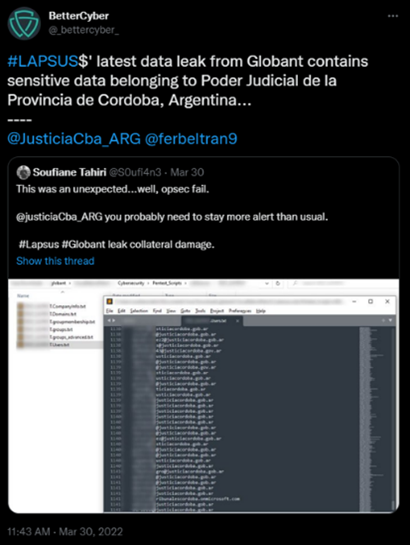 Towards the end of December 2022, Play was observed using a method to exploit two ProxyNotShell vulnerabilities in Microsoft exchange to gain initial access in environments. The ProxyNotShell flaws are:

The flaws impact Exchange Server 2013, 2016, and 2019. If successful, an attacker could exploit ProxyNotShell to elevate privileges to run PowerShell in the context of the system, gaining arbitrary or remote code execution on vulnerable servers. Although the vulnerabilities were patched by Microsoft in November 2022, Play was able to bypass URL rewrite mitigations for the Autodiscover endpoint implemented by Microsoft.

Next, Play was able to leverage legitimate Plink and AnyDesk executables to maintain access. They also performed anti-forensics techniques on the server, attempting to hide their activity. The security researchers at CrowdStrike investigated several Play ransomware intrusions where they suspected the threat actors used ProxyNotShell as their entry vector. However, after analyzing and after reviewing their logs, they determined that there was no evidence of exploitation of CVE-2022-41040 for initial access but “corresponding requests were made directly through the Outlook Web Application (OWA) endpoint - signifying a previously undisclosed exploit method for Exchange.”

According to Security Affairs, a security researcher from Huntress Labs discovered Play’s tool set and shared it through MegaUpload. The tools include a Python script “poc.py” (which led CrowdStrike to replicate the logs generated in recent Play ransomware attacks).

CONNECTIONS TO OTHER GROUPS

As previously stated, Play’s name originated from the .play extension that is added after encrypting files. The threat actors have similar behavior and tactics to HIVE and Nokoyawa ransomware. The threat actor was observed using similar file names and file paths of their respective tools and payloads. Trend Micro also found evidence hinting that the operators behind Nokoyawa are associated with the operators behind HIVE, as there are many similarities between their attack chains.

One of the ways that Play is set apart from HIVE and Nokoyawa is through their use of AdFind – a command-line query tool which collects information from Active Directory (AD). HIVE has been observed using tools such as the TrojanSpy.DATASPY trojan to gather victim information. Play, HIVE, and Nokoyawa may not share all the same indicators, but their shared tactics and tools indicate that they are affiliated in some way.

Trend Micro also found evidence of a possible connection between Play and Quantum ransomware. Quantum is known for being a splinter group of Conti. The ransomware operation was taken over by Conti Team Two in April 2022, but the group kept Quantum’s original name. Quantum is also known for employing their version of BazarCall, called Jormungandr, and hiring people who specialize in OSINT, spamming, design, and call center operations.

Trend Micro’s researchers stated that the Cobalt Strike beacons used in Play’s attacks, have the same watermark that was dropped by the Emotet and SVCReady botnets – two botnets that have been observed in Quantum ransomware attacks.

As you can see above, Play’s infection chain includes using compromised valid accounts or unpatched Fortinet SSL VPN vulnerabilities to gain access to organization’s networks. They use living-off-the-land binaries (LOLBins) during their attacks (i.e., using WinSCP for data exfiltration and Task Manger for Local Security Authority Server Service for dumping and credential cracking). Like other ransomware gangs, Play uses the double extortion model against their victims. The threat actor exfiltrates data before deploying their ransomware and archives the victim’s files using WinRAR before uploading them to sharing sites.

Regarding execution, Trend Micro observed Play using scheduled tasks and PsExec during execution. The ransomware gang also creates a GPO, which can control user and machine settings in the AD. Play uses batch files to execute PsExec, which executes processes on other systems and allows the spread of the ransomware. This also assists Play in its reconnaissance activities.

After gaining access to accounts, Play uses the accounts as a persistence mechanism. If Remote Desktop Protocol (RDP) is disabled on their victim’s system, Play will enable it by executing “netsh” commands – establishing inbound connects within the victim’s system. Next Mimikatz is used to extract high privilege credentials from memory. To avoid detection, GMER, IOBit, Process Hacker, and PowerTool is used to disable antivirus tools and monitoring solutions. Wevtutil or a batch script is used to remove indicators that show Play was present in a system, while Windows Defender is disabled through PowerShell or command script.

Play uses the following tools to move laterally across a victim’s system:

To avoid triggering network data transfer, Play splits victim data into chunks before exfiltration. To compress the files in .RAR format, they use WinRaR.

what organization's can do

Remember, relying on outdated tools and point solutions will only compromise your network or system. Organizations should rely on modern technology to detect complex attacks.

Because the cyber landscape is always changing, it is imperative to be aware of new cyber attack strategies and techniques. Avertium is here to keep you informed and to keep your organization safe. We recommend the following services for the best protection against ransomware attacks:

The FBI and CISA urge all organizations to apply the following recommendations to prepare for, mitigate/prevent, and respond to ransomware incidents:

They denounce that they hacked the Judicial Power of Córdoba: it affects the website, the systems and the database (clarin.com)

How to Prevent Ransomware Attacks: Top 10 Best Practices in 2022 | UpGuard