In April 2022, a new ransomware group named Black Basta began targeting several high-value organizations. The ransomware gang has a total of 18 global victims, with the largest number of victims based in the U.S. Black Basta is known for stealing corporate data and documents before encrypting devices. They’re also known for their double extortion attacks, which shame victims into paying the demanded ransom or risk having data leaked on a leak site.

Last week, Avertium published a Threat Intelligence Report discussing the state of ransomware in 2022. Ransomware trends are on the rise and one of those trends is victim shaming – a trend that Black Basta has made used heavily. As we get ready to dive deeper into the tactics and techniques of Black Basta ransomware, let’s remember that even though ransomware is here to stay, there are ways to protect your cyber environment and keep your organization safe from ransomware threat actors like Black Basta.

Active since April 2022, Black Basta is both ransomware and a ransomware gang. The gang has been observed targeting organizations in the U.S with a hyper focus on the construction and manufacturing industries. They’ve also been observed targeting the real estate, business services, food and beverage, chemicals, insurance, healthcare, and metals and mining industries.

Two of the most recent and well known Black Basta attacks include their attack on the American Dental Association (ADA), as well as their attack on Deustsche Windtechnik.

The ADA is a dentist and oral hygiene advocacy association. The organization had 2.8 GB of data stolen, with 30% of that data leaked on Black Basta’s leak site. The attack disrupted some of the organization’s email, phone, and chat systems. The ADA had to take their systems offline and worked with third party cyber security specialists to determine the severity of the attack.

The German wind farm operator, Deustsche Windtechnik was attacked in April 2022 and had to shut off their remote data monitoring connections to their wind turbines for about two days as they recovered. Despite the company not confirming if they were hit with a ransomware attack, researchers were able to confirm that they were due to finding the company’s name on the leak site of Black Basta.

The attack on Deustsche Windtechnik is just one of several cyber attacks on German energy providers this year. In March 2022, Nordex was forced to shut down their IT systems across several locations due to a cyber attack. Viasat also suffered from a cyber attack this year, causing 5,800 Enercon wind turbines in Germany to malfunction. It has not been confirmed if the ADA or if Deustsche Windtechnik paid a ransom to Black Basta.

A deep dive analysis into Black Basta ransomware reveals that the cyber criminals’ ransomware appends the extension “.basta” at the end of encrypted files. According to Cyble Research Labs, Black Basta is a console-based executable ransomware that can only be executed with administrator privileges. After the ransomware executes, it deletes shadow copies by using vssadmin.exe, removing the Windows backup so their victims can’t revert the system to its previous state after encryption.

After removing the backups, Black Basta drops two image files into the temp folder of the infected system. Next, the ransomware changes the desktop wallpaper using the API systemparamaterssinfoW() and uses a file called dlaksjdoiwq.jpg as the desktop background wallpaper. Once Black Basta creates the registry entry, it hijacks the FAX service, checking to see if the service name FAX is present in the system. Once it verifies that it’s present, Black Basta deletes the original, creating a new malicious service named FAX.

Next, the boot options are checked using GetSystemMetrics() API, while HKEY_LOCAL_MACHINE\SYSTEM\CurrentControlSet\Control\SafeBoot\Network\Fax is added in the registry to start the FAX service in safe mode. After the ransomware reboots the system using the ShellExecuteA() API, FAX service launches and begins encryption. According to Cyble Research Labs, the following list of files and folders are excluded from encryption:

Using FindFirstFileW() and FindNextFileW) APIs to find files, Black Basta finds the files in their victim’s machines and encrypts them – using a multithreading approach for faster encryption. 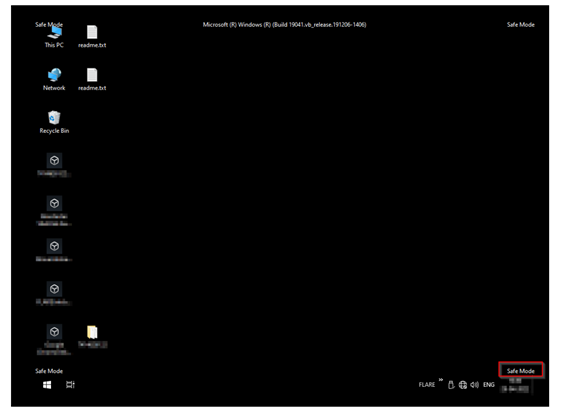 Researchers believe that Black Basta hasn’t started recruiting affiliates in underground forums, but their previous advertisements they posted before their attacks suggest they use stolen credentials (purchased on the dark net) to get into organization’s systems.

The threat actors behind Black Basta were suspected to be a rebrand of the ransomware gang, Conti. In a previous Threat Intelligence Report we explained that Conti is a Russian-speaking RaaS organization, who uses RaaS to deploy disruptive ransomware attacks that target critical infrastructure, like hospitals and government organizations. Conti generally focuses on attacking companies with more than $100 million in annual revenue. They specialize in double extortion operations of simultaneous data encryption and data exfiltration for financial gain. If the ransom is not paid, Conti will blackmail their victims by threatening to publish stolen files.

In May 2021, the FBI notified the public stating that Conti tried to breach over a dozen healthcare and first responder organizations. By September 2021, the gang successfully stole the data of several healthcare organizations. In March 2022, we published another Threat Intelligence Report featuring the gang. This time, we discussed Conti’s leaked internal chats, published on Twitter by a Ukrainian security researcher in February 2022. The leak contained several years’ worth of internal chat logs linked to Conti and can be read here.

Because of the leaked chats and Conti’s leaked source code, there was speculation that Conti’s successful ransomware operation was soon to be dismantled, but researchers found that not to be the case. In fact, it appears as if Conti has simply started to rebrand and strategize despite the leaked chats.

When Black Basta hit the scene in April 2022, researchers stated that the ransomware gang shared similarities with Conti. For example, Black Basta’s data leak site was very similar to Conti’s data leak site. The gangs also shared the same victim recovery portals. However, Conti denied that they rebranded as Black Basta and called the group “kids”.

Despite this declaration, researchers still held the belief that Conti rebranded as Black Basta. When Black Basta was discovered and the similarities between the two groups were pointed out, there was speculation that Black Basta could have been a faction of Conti that went rogue, and Conti was not telling the truth. When Conti’s chats were leaked, we not only learned how the ransomware gang operated, but we also learned how some Conti employees truly felt about attacking certain critical industries, such as healthcare.

In October of 2020, Conti’s members had plans to attack 400 hospitals in the U.S and in Britain. The attacks were launched during the height of the COVID-19 pandemic, when hospitals needed their computers the most. Additionally, Conti ultimately had access to over 400 healthcare facilities (not specifically hospitals). In May 2021, Conti attacked Ireland’s Health Service Executive (HSE) that operates the country’s public health system. It ended up disrupting the public health system and the recovery costs were expected to exceed $600 million.

The attack on HSE led to questions from some Conti members because the members were under the assumption that the group didn’t attack public resources like hospitals. Some of Conti’s managers adhered to this policy, and in June 2021, a manager named “Reshaev” told another user named “Pin” that he wouldn’t attack a target he infiltrated because of this policy. “Pin” countered “Reshaev” and said that the network belonged to a sports clinic. “Reshaev” replied that they don’t touch the healthcare sector at all, therefore they would be avoiding the clinic.

However, the ban wasn’t upheld across the entire Conti organization because in October 2021, “Reshaev” asked someone named “Stern” (the most senior Conti manager) if he approved of a ransomware attack against a hospital by an affiliate called “Dollar”. However, there was no reply, so the question was asked again.

Reshaev: “Did you give the green light to the hospital lock to Dollar?”

“Dollar” responded with a series of numbers and sums apparently calculating a 20 percent share of something. In the case above, you can see how it’s possible for a former Conti employee to branch off and start their own ransomware gang due to differing opinions. However, Cyberint Research, dug a little deeper and found that a ransomware sample from February 2022, generated a ransomware note from a group named “no_name_software”. The group took responsibility for Black Basta ransomware, and the Onion page disclosed in the ransom note was the same Onion page Black Basta currently operates.

Conti may not be associated with Black Basta, but that doesn’t mean they aren’t trying to rebrand at all. According to our partners, AdvIntel, Conti is currently rebranding as multiple ransomware groups and that the brand, not the organization, is shutting down. On May 19, 2022, Conti’s official website went offline, as well as their negotiations service site. Conti’s infrastructure (chat rooms, servers, proxy hosts, etc.) went through a massive reset.

The publicity function of Conti’s blog is still active, but the operational function of “Conti News” (used to upload new data to force victims to pay) is defunct – including infrastructure related to data uploads, negotiations, and the hosting of stolen data. AdvIntel believes that Conti can no longer support and obtain extortion and that the shutdown was not spontaneous but calculated. May 19, 2022 is Conti’s official date of death with their attack on Costa Rica being their final dance.

The attack on Costa Rica, which forced the country to declare a state of emergency, was Conti’s way of keeping the illusion that they were still active and diverting everyone’s attention, while working on their restructuring. During the diversion tactics, Conti’s extension groups such as BlackByte and KaraKurt were actively and silently attacking organizations. Additionally, infiltration specialists who were the backbone of Conti, were forming alliances with BlackCat, AvosLocker, HIVE, and HelloKitty/FiveHands.

There is no evidence that suggests that Conti’s leaked chats have an impact on their recent activities, but perhaps the event that provoked the leak (Conti’s support of Russia) in the first place may have played a part in their demise. By engaging in political discourse, Conti intervened in Russian state matters, and opened themselves up for scrutiny and attacks from hacktivists like Anonymous and NB65.

As we stated in our previous Threat Intelligence Report featuring AvosLocker ransomware, ransomware trends are on the rise and ambitious threat actors like Black Basta are in it for the long haul. Black Basta’s recent attacks prove that they are not only consistent but persistent. Conti even addressed them in their blog when there was speculation surrounding a connection to the gang. This acknowledgement could be an indicator of Black Basta’s talent, as well as their gaining popularity. It’s important for organizations to remain vigilant in implementing cyber security best practices and to keep a watchful eye on threat actors on the rise.

Sometimes anti-malware solutions just aren’t enough. Ransomware like Black Basta is a great risk to organizations, especially when they are persistent and attack critical industries like healthcare and manufacturing. However, despite Black Basta’s success with attacking these industries, Avertium had advanced services that can help your organization remain safe and proactive:

Inside the Conti leaks rattling the cybercrime underground | README_

Beware of new Black Basta ransomware! Here is what damage it can cause | Tech News (hindustantimes.com)

Inside Conti leaks: The Panama Papers of ransomware - The Record by Recorded Future